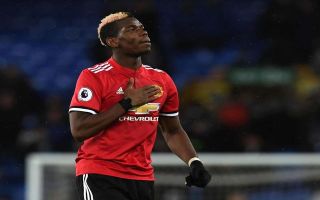 Man Utd midfielder Paul Pogba has been at the centre of plenty of discussion this week, but Guillem Balague has delivered some positive transfer news for United fans.

It stems from the fact that the French international has struggled for form in recent games, as he has been substituted in away defeats at Tottenham and Newcastle United in quick succession.

That led to criticism, while Jose Mourinho hit back at the media on Friday over false reports of issues between him and Pogba as well as possible doubts over the 24-year-old’s future at Old Trafford, as noted by BBC Sport.

In truth, it is quite the leap to go from a player not playing well to him possibly leaving the club in the space of a fortnight, but there is a point to be made that together, Mourinho and Pogba need to figure out how he can be most effective and decisive for the team or the problems may well persist on the pitch.

Nevertheless, Balague has revealed that United likely don’t have to be concerned with the possibility of Real Madrid hovering over the situation, as he doesn’t believe the Frenchman is even on their transfer radar.

“When reports like that emerge, don’t be surprised that reports claiming Real Madrid want him soon follow,” he told Sky Sports.

“But they don’t, they do not have the money to finance such a deal after they buy their main targets this summer. Perhaps more importantly, Real president Florentino Perez does not view him as a target.”

That’s seemingly one less concern regarding Pogba for United supporters, but they’ll still be desperate to see him get back to top form and help lead them to success beyond this season.

The midfield ace has three goals and 10 assists in 23 appearances so far this season, and given he’s missed 15 games so far this season through injury and suspension, it’s still a relatively decent impact to suggest that the whole reaction has been over the top.