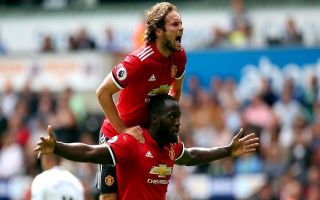 Manchester United striker Romelu Lukaku has revealed his desire to return to his former side Anderlecht once his career at Old Trafford has come to an end.

This is according to Manchester Evening News, who are reporting that the forward joined Jose Mourinho’s side from Everton over the summer just gone, and that he was visiting the Belgian side’s training centre this week ahead of his side’s FA Cup clash against Huddersfield on Saturday.

Belgian news outlet HLN have stated that, as translated and re-reported by Manchester Evening News, that Lukaku spoke about his want to return to the club he started his career at, stating “My dream was always to play for Anderlecht. Before the end of my career I will definitely return, I can already promise that. I had a wonderful time there.”

During his time at Anderlecht, Lukaku managed to wow fans with his ability at such a young ace, as the forward was able to clock up an astonishing record of 41 goals and 18 assists in 91 appearances for his boyhood side.

Lukaku then secured a move to Chelsea in 2011, however his time at Stamford Bridge didn’t exactly go to plan, as the Belgian international failed to score a single goal for the club’s first team during his stint with them.

Lukaku was then loaned out to West Brom where he impressed, before the Red Devils ace secured a move to Everton, where he flourished under manager Roberto Martinez. During his time with the Toffees, Lukaku was able to score 87 goals and 29 assists in 166 appearances, an impressive return.

The former Chelsea man was then granted a move to Old Trafford, a place where the player has impressed so far, as the 24-year-old has scored 19 and assisted six in 37 appearances.

It remains to be seen how Lukaku will be viewed by United fans once his time at Old Trafford is up, as the Belgian ace eyes up a return back to the side where he first broke onto the scene with.