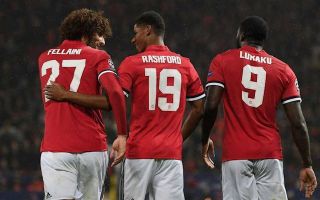 Lukaku has struggled of late with his form after failing to put together consistent goalscoring performances.

The Belgian has head to fend off harsh criticism for failing to compete with the likes of Kane and Aguero in the league this season.

However, today’s performance showed maturity to Lukaku’s game amongst much more.

The frist goal showcased Lukaku’s incredible strength while his second displayed his link-up play ability as he combined superbly with Alexis Sanchez.

United fans took to social media to praise the Belgian and even stated that he looked much more improved.

That was a brilliant counter. Very clinical, superb ball from Alexis and Lukaku has been outstanding with his two chances!

Lukaku’s link up play has massively improved, unless of course you hate him that much not to give him that credit. Glad for him, he’s learning

I’ve been harsh on Lukaku but that was quality. Nice to score early for a change! #MUFC #FACup

What a player. Romelu Lukaku. Wouldn’t change him for anyone.

Good second half imo. Every player including Smalling played well. Well deserved MOTM for Lukaku. Need him to now take this new found confidence to the UCL & league games.