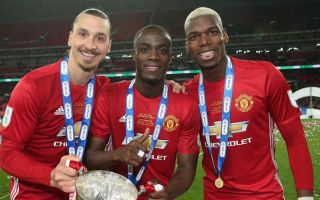 Manchester United fans were ecstatic upon hearing the news that Eric Bailly had returned to the Red Devils squad for their FA Cup clash with Huddersfield this evening.

Bailly has established himself as one of United’s most important defenders since sealing his £30m move from Villarreal. (Fee per the Independent)

However, Bailly has struggled to cement regular fitness for United this season and was ruled out of action for United for over two months after sustaining an ankle injury in November.

The news that the Ivorian is now fit enough to take a place on Manchester United’s bench today was greeted by ecstatic enthusiasm from United supporters.

The Red Devils have lost to both Newcastle United and Tottenham in recent weeks in the Premier League.

Further, Phil Jones was largely at fault for United’s loss to Tottenham with the English defender turning a cross into his own net.

United’s back four has looked susceptible without Bailly and both Phil Jones and Chris Smalling have received a flurry of abuse for their recent poor form.

United fans took to social media to express their excitement at Bailly returning and even speculated that there would no longer be any space for Chris Smalling in the United side.

Oh – this man is back in the squad, too ? pic.twitter.com/NWxjYsLwIl

The beast is back!

Buzzing to see Bailly back

Good team. As expected De Gea & Valencia getting a rest. Brilliant to see Bailly back in the squad! #mufc

Good to have Lindelof back in the side. Needs a run of games – feel that he could do well alongside Bailly.

Also a chance to see another side of McTominay’s game. Holds more attcking responsibilities today with Matic and Carrick supporting him. https://t.co/llIZvCBpLX

I truly believe next to Eric Bailly we could have a partnership to last a decade… in fact, I’d go as far as to say he gets in above Smalling, Jones, Rojo & Lindelof now for me