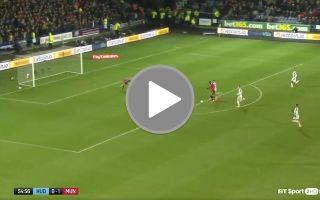 Lukaku had already given United the lead inside three minutes after latching onto a perfect ball threaded through the heart of Huddersfield’s back four from Juan Mata.

Lukaku showed impressive strength for his opener, but his link-up play for his second was even greater.

Sanchez and Lukaku linked-up with a fantastic one-two as they swept through the entire Huddersfield half in a matter of seconds.

Lukaku calmly slotted past Jonas Lossl in the Huddersfield goal to score his fourth FA Cup goal in just three fixtures in the competition this season.

United had been dealt a huge blow before the game with Paul Pogba ruled out of the action due to illness.

However, Eric Bailly returned to the United squad for the first time in over two months after sustaining a serious ankle injury in November.

A near carbon copy of the first goal… Just look at the distance Romelu Lukaku covers here ??