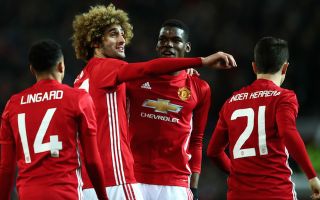 Marouane Fellaini has agreed to leave Manchester United for Besiktas according to reports from Turkey.

The Mirror have stated that the Turkish media are reporting that a deal has been reached and agreed for Fellaini to join the Turkish giants Besiktas in the summer.

The news comes in the following weeks that Fellaini has been ruled out with a knee injury he picked up against Tottenham last month. The Belgian was pulled form the action during the fixture by Jose Mourinho after only being introduced to the game for seven minutes. Further, Fellaini is now likely to be ruled out for two months according to the Mirror.

Fellaini has certainly had a turbulent career at United since singing under David Moyes for a fee of £27m in 2013. (Fee per the BBC)

The previously mentioned report states that the Belgian’s contract will expire in the summer allowing Besiktas to tie up a deal for the midfielder.

While Fellaini has just made twelve appearances for Man United in the league this season (with nine coming from the bench), he has managed to register three goals from midfield.

However, it appears that the star’s time at Old Trafford is coming to an end after five years at the club.