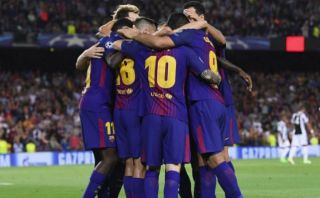 Barcelona manager Ernesto Valverde has reportedly delivered a brutal message to Ousmane Dembele after leaving him out of the team in Saturday’s win over Eibar.

The France international arrived at the Nou Camp from Borussia Dortmund in the summer with a reputation as one of the best young players in the world, but has struggled so far at his new club.

Don Balon recently linked Dembele as a €60million (£53m) target for Arsenal and it now looks as though he’s really struggling to impress his manager after failing to get onto the pitch last night.

The latest from Don Balon is that Valverde told Dembele yesterday that he was not ready to play for this Barca team, even if he did arrive with a big price tag and reputation.

This surely does not bode well for Dembele’s future, with the 20-year-old likely running out of time to prove himself at Barcelona as other clubs will likely start to look at him.

Arsenal will surely be keeping a close eye on the youngster’s situation as they could do with bringing in some big names up front in the near future.

Despite signing Henrikh Mkhitaryan and Pierre-Emerick Aubameyang this January, Arsenal remain short in the final third of the pitch after losing Alexis Sanchez, Olivier Giroud and Theo Walcott in one transfer window.

Dembele could surely shine if given the chance elsewhere, as it looks like he’s simply found himself at the wrong place at the wrong time with Barcelona.