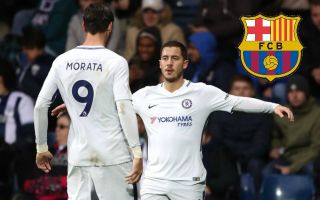 Chelsea striker Alvaro Morata reportedly rejected the chance to join Barcelona in a shock £88million transfer from Real Madrid during the summer, it has emerged.

The two teams meet in the Champions League this Tuesday and Don Balon have supposedly learned that Morata was a target for Chelsea’s opponents before he ultimately moved to Stamford Bridge this season.

The Spain international was not a regular at previous club Real Madrid and could have moved to one of their major rivals in an £88m deal, only to turn it down as he didn’t feel he would significantly improve his playing time at the Nou Camp, according to Don Balon.

The report adds that Madrid were also not keen on selling to a rival, despite Barcelona offering more money than Chelsea, who ended up signing the 25-year-old for what BBC Sport claimed was a club-record £60million fee.

Morata probably made the right choice in terms of boosting his playing time by moving to England, though it’s fair to say things haven’t really gone his way for much of his time in the Premier League.

With Chelsea struggling in recent times, Morata’s prospects of lifting silverware this season look a little bleak, with a big improvement needed from almost everyone at the club if they are to stand any chance of winning the FA Cup or Champions League, while the league title is surely out of reach.

Barcelona, on the other hand, enjoy a comfortable lead in La Liga and should be among the favourites to conquer Europe this season.