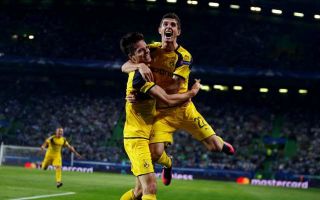 Manchester City are reportedly interested in sealing the transfer of Borussia Dortmund midfielder Julian Weigl, who has also recently been linked with Manchester United.

According to the Daily Mirror, the Sky Blues would have to pay around £40million for the talented 22-year-old, who looks ideal for Pep Guardiola’s side’s style of play.

With City already so far ahead of United in this season’s Premier League title race, the Red Devils surely cannot afford to miss out on such a quality player in this particular transfer battle.

The onus will be on Jose Mourinho to strengthen his squad this summer and Weigl seems ideal as a candidate to replace Michael Carrick as he nears retirement at the end of this season.

But if Guardiola can get there first then there’s no telling how good this City side could be once again next term.

The Independent recently suggested United were ahead of City in the running for Weigl, but that may no longer be the case if the Mirror’s report is anything to go by.

The Manchester Evening News have also recently linked United with potential midfielder signings, so it may be that the likes of Arturo Vidal and Jorginho can be brought in instead of Weigl if that particular deal fails.

This would be another big blow for Dortmund as they struggle to hold on to star players, having lost Ousmane Dembele to Barcelona last summer and Pierre-Emerick Aubameyang to Arsenal this January.