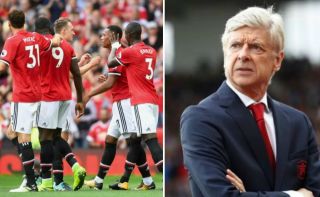 Arsenal are the bookies’ favourites to sign both Manchester United defenders Chris Smalling and Phil Jones in this summer’s transfer window.

Ladbrokes are currently providing odds on the next clubs of the England international duo as an exit looks on the cards for both after their poor recent form at the back.

United certainly look as though they could benefit from a change in that area, with the club needing to tighten up if they are to stand any chance of catching Manchester City next season.

The Daily Mirror have recently reported that Jose Mourinho could look to replace the pair, while the Manchester Evening News have linked the Red Devils with an interest in signing Tottenham centre-back Toby Alderweireld.

The Daily Star have claimed Arsenal are interested in Smalling and that he could leave for £25million, and Ladbrokes now expect both players could be on the move from Old Trafford to the Emirates Stadium.

Smalling’s next club being Arsenal is currently 5/2 with the bookies, while Jones is priced as ‘evens’ to make the switch to north London.

Alex Apati of Ladbrokes said: ‘It’s looking likely Smalling and Jones will both be leaving United when the season ends, and the latest odds suggest Arsene Wenger will bring the pair to the Emirates as part of a much-needed defensive shake-up.’

Arsenal fans may not be too convinced, but the Gunners could certainly do with some new additions at the back as well as Per Mertesacker is due to retire in the summer, while Shkodran Mustafi and others have been unconvincing in recent times.