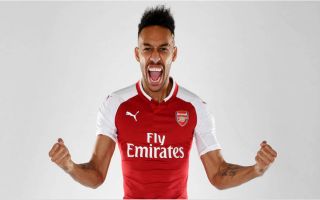 Things aren’t going to plan for Arsenal on the pitch, but confirmation of a new sponsorship extension with Fly Emirates is certainly good news for the club.

Arsene Wenger’s side are in another battle for a top-four finish in the Premier League this season, were knocked out of the FA Cup and face a long road in the Europa League to potentially book their seat at Europe’s top table next season.

However, in more positive news they do have the chance of winning silverware this weekend when they take on Manchester City in the League Cup final at Wembley.

As for their big off-the-pitch news though, the Gunners confirmed their contract extension with Emirates on their official club website, while Sky Sports have added reported financial details to offer a clearer picture as to how lucrative it is for the Premier League giants.

It’s suggested that Arsenal will make more than £200m over the next five years with the new agreement now running until 2024, which in turn makes it their most lucrative sponsorship deal in the club’s history.

While that’s all very impressive and will fill Arsenal fans with confidence that the club is continuing to grow stronger off the pitch, the key factor for them will undoubtedly be how that helps them become more competitive on it.

Although they’ve had success in the FA Cup in recent years, that’s nowhere near enough to meet the lofty expectations of the fans after their previous era of success earlier in Arsene Wenger’s tenure.

In turn, it remains to be seen whether or not this new sponsorship deal continues to strengthen them and allows them to keep spending after splashing out £56m on Pierre-Emerick Aubameyang last month, as per BBC Sport.