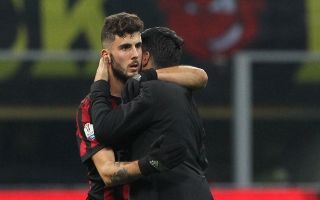 AC Milan coach Gennaro Gattuso is enjoying himself at the moment, so much so he has continued to joke about Patrick Cutrone’s love life.

The Rossoneri took their unbeaten run to 10 games in all competitions after their win over Sampdoria on Sunday, as they’re now making a real charge for a Champions League qualification spot.

Evidently, the mood within the camp is good right now as following on from his previous comments about Cutrone’s love life, as seen in the tweet below, Gattuso was given possible partners for the youngster to assess by the Sky Sport Italia crew in his post-match interview at the weekend, as seen in the video below.

The 40-year-old seemingly took to his task of being match-maker quite well, as he ruled out a volleyball player for being “too muscular”.

“No, she’s too muscular – she’ll break him! It’s best you don’t show me anymore, or I’ll end up causing trouble,” he is quoted as telling Sky Sport Italia on live TV, by Football Italia.

It’s fine for Milan to be enjoying their results right now, but given his passion and desire to succeed on and off the pitch, Gattuso will undoubtedly be fully aware that they’ll need to get back to the serious stuff this week as they face Roma, Lazio and Inter in the space of a week starting next weekend.

Gattuso live on Sky choosing a girlfriend for Cutrone ??pic.twitter.com/nJ2zKXIIGZ