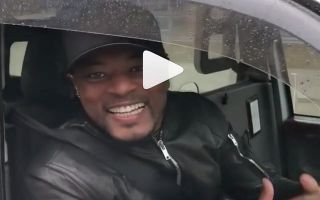 Veteran defender Patrice Evra never fails to put a smile on our face as he’s back with his social media antics on Monday ahead of training with West Ham United.

As per Sky Sports, the 36-year-old joined the Hammers on a free transfer earlier this month and will remain with them until the end of the season.

He’s yet to feature for David Moyes’ side, but it looks as though he’s certainly loving London life and ‘this game’ as he was in a very good mood on his way to train with his teammates.

Before that though, he had his Instagram followers in stitches on Monday morning as he revealed he was driving to training in a London cab, with a grumpy looking older brother in the backseat as his sibling was as brilliantly animated as always.

A quick glance through the comments left by his followers shows just how well it went down, and it’s good to see Evra in high spirits as he looks to make an impact in the next few months at West Ham while also remaining one of the best personalities in the game on social media.

West Ham fans will of course be hoping for a positive influence on and off the pitch from the experienced Frenchman, but for now, we’re all surely loving this latest post…

On my way to training in my new silver London cab ? ?. Again and again sharing my #monday #motivation even with a #grumpy ?passenger @dominique.evra . I love you all, have a nice raining day?? I love this game ahahahah #ilovethisgame #positivevibes #positiveenergy #training #funny #crazy #love #laugh #sharing #london #taxi