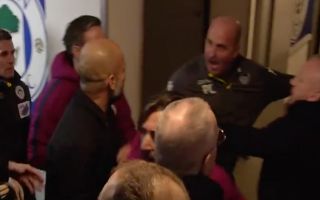 Man City were left fuming in their FA Cup clash with Wigan on Monday night after Fabian Delph was sent off just before the half-time interval.

It looked as though referee Anthony Taylor was going to brandish a yellow card for his late foul on Max Power, but the official opted to change his mind and instead showed him a straight red.

In turn, City have it all to do in the second half to either see off a spirited Wigan side or ensure that they come away with a replay now that they’re a man down.

Nevertheless, it seemed as though the tempers boiled over heading back to the dressing rooms as seen on the tunnel cam below, with Guardiola heavily involved with a furious Wigan boss Paul Cook.

In fairness, it looked as though the Spanish tactician was trying to diffuse the situation and keep the two groups of players away from each other, but Cook was left incensed by something and it remains to be seen if both sides can keep their cool in the second half.

Guardiola wasn’t the least bit impressed when the initial decision was made though, as he was seen on the BBC cameras remonstrating with the fourth official and it seems as though all that frustration and anger spilled over into the tunnel.

Pep Guardiola attacking the Wigan manager in the tunnel after Fabian Delph got sent off….? pic.twitter.com/sr6n0xziXo