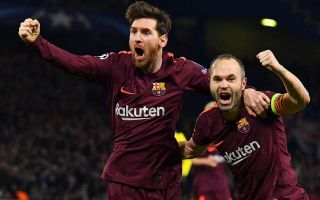 Barcelona secured a 1-1 draw with Chelsea in the first leg of their last-16 Champions League tie at Stamford Bridge on Tuesday night.

Willian had given the hosts the lead after striking the post twice in the first half, but the lead was short-lived as Lionel Messi stepped up to score a crucial away goal for the Catalan giants.

That could prove to be decisive in the tie, as Chelsea looked the better side for large periods but were unable to make the most of it before eventually being made to pay for a mistake at the back.

In turn, Antonio Conte will perhaps be frustrated that they weren’t able to hold on for a victory, but they will surely go to the Nou Camp with some confidence of being able to advance to the next round having successfully nullified Barca’s threat for the most part.

Willian scores top marks in this one as he was unfortunate not to have more than the one goal, and the Brazilian was a constant threat to the visitors with his technical quality on the ball.

Conversely, there weren’t too many Barcelona players who stood out in particular, but that won’t matter much to coach Ernesto Valverde who will have Messi to thank yet again for another crucial strike following on from a delightful assist from Andres Iniesta.

Now we have a proper tie on our hands! pic.twitter.com/x3YBwv9KgZ

Messi’s goal was his first against Chelsea in nine meetings with the Blues, ending a barren run of 730 minutes without one against the Premier League giants.

It came at a pivotal time too and so he will be delighted to break that duck and earn an important result for his side to potentially help them advance to the next round.

After 730 minutes and nine appearances, Lionel Messi has now scored his first goal against Chelsea in any competition.

It was always just a matter of time. pic.twitter.com/IXXDD4k6dU

Despite the disappointment of not being able to hold on and take a lead to the Nou Camp, Chelsea fans were pleased with what they saw from their players on Tuesday night.

Many left comments insisting that they were proud of the effort from the team, and now they’ll hope that they can find an away goal of their own next month and advance in the competition at the expense of the La Liga leaders.

Very good performance today, only 1 mistake made and that’s all Barca needed, unlucky. Take this momentum into the next game against united and that should be a win. Biggest positives from this game are rudiger, dave and willian – terrific performances in my opinion. #CHEBAR

Im proud of you guys today. I really am! We played well, boys!!! Heads up! Not out of this yet

Heart broken . But proud of you boys. ??

Unlucky! But the lads played well ?