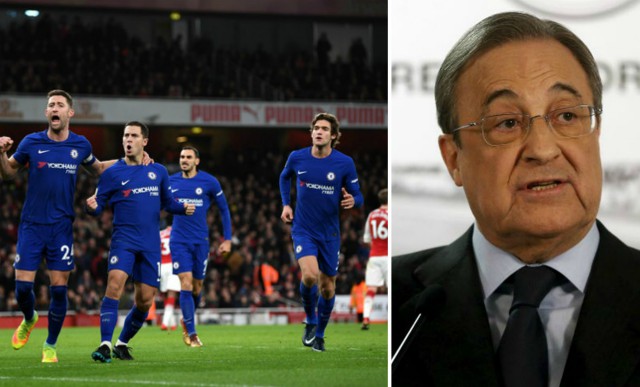 According to reports in Spain, Real Madrid are confident of closing in on the signing of Chelsea ace Eden Hazard this summer.

The 27-year-old has been a key figure for the Blues since joining them in 2012, going on to score 87 goals in 284 appearances in all competitions while winning two Premier League titles.

As he continues to prove his influence this season with 15 goals and nine assists in 35 appearances in all competitions, Chelsea will surely be desperate to keep hold of him beyond this year.

However, according to Diario Gol, as re-reported by The Express, Real Madrid president Florentino Perez will plan to travel to London for discussions amid growing optimism that Hazard can be prised away from Stamford Bridge with Isco heading in the opposite direction.

The Spaniard is a top-class player as we’ve seen in his displays for club and country, but whether or not that’s enough to fill the potential void left behind by Hazard is debatable.

Speculation refuses to go away over Hazard’s future though, and so it will be a worrying time for Chelsea fans as they’ll want to see the club strengthen the squad, not merely replace key departing individuals.

As for Madrid, they’re in need of such a signing given Cristiano Ronaldo turned 33 earlier this month while Gareth Bale has had his injury problems in the last couple of years.

Given Hazard has also shown an ability to play as a false nine through the middle, Karim Benzema’s dismal tally of just seven goals in 27 appearances so far this season could also see him at risk of being replaced.

Hazard, 27, arguably has his best years of his career coming up as he’ll hope to peak around this age with a wealth of experience behind him, and it could be a quality signing to add a longer-term picture to the attacking unit at the Bernabeu.