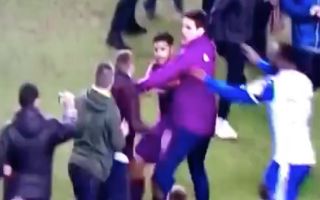 Man City striker Sergio Aguero was involved in the ugly scenes that marred the FA Cup tie with Wigan on Monday night, but he was reportedly defending himself.

As seen in the clip below, the Argentine international was seen lashing out at a Wigan fan after the full-time whistle as the police and stewards failed to prevent a pitch invasion after the home side’s 1-0 win.

Initially, footage suggested that he had merely lost his temper and hit out at the fan who was seen squaring up to him, but as reported by the Metro, Aguero has told his friends that he was spat on by the ‘fan’ in question.

The disappointing thing about the entire incident is that even if the allegation is proven right, it’s difficult to see the FA not taking action on his reaction even though he would have surely been within his rights to defend himself.

It remains to be seen what happens next as Wigan have launched an investigation into the matter, as per the report, with the help of City and the FA, and so they’ll look to get to the bottom of it.

Nevertheless, it’s disappointing in itself that this is the main talking point the day after, with Wigan producing a top performance with Will Grigg’s goal sending them through to the next round at the expense of the Premier League leaders.