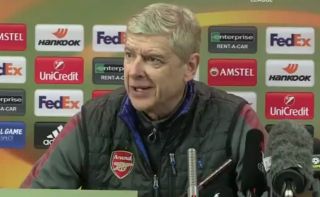 Arsenal manager Arsene Wenger has made an embarrassing claim ahead of this week’s Europa League and Carabao Cup double header.

Gunners fans are known to be growing increasingly impatient with their long-serving manager, who has not enjoyed nearly as much success in the second half of his reign as in his first.

Arsenal have not won the Premier League since all the way back in 2003/04, and have in that time seen a number of below-par players talked up as being better than they were or as being potential stars for the future before ultimately disappointing.

It is clear to almost anyone who’s watched the pair in action lately that they simply do not come under that category and that it could be taken as a real insult to fans’ intelligence to refer to them as such.

Wenger confirmed in his press conference that Ospina would be selected ahead of Cech for Arsenal’s upcoming games in the Europa League and Carabao Cup, in what looks a potentially risky move given the Colombian’s inconsistency.

That said, Cech hasn’t been at his best recently either, so it hardly comes across as being spoilt for choice in goal – and more Wenger being forced to try something different due to recent poor performances from his established number one.

David Ospina linked with a move to Juventus amid uncertain future with Napoli Jun 18 2021, 5:40
Juventus