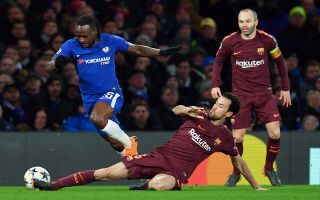 Barcelona weren’t particularly convincing in their 1-1 draw with Chelsea in the Champions League on Tuesday night, but Sergio Busquets was in top form.

The Catalan giants struggled to create real chances against the Blues, who did well throughout and arguably deserved to take a lead into the second leg of their last-16 tie.

However, Lionel Messi grabbed a crucial away goal for Barca and now they’ll be confident of advancing in the competition when the two sides meet again next month.

Naturally, the Argentine forward got most of the credit after the game, but it was also good to see Busquets get a nod on both Twitter and in the BT Sport studio from pundits Rio Ferdinand, Frank Lampard and Steven Gerrard.

The Spanish international quietly ran the show in midfield, as the stats below would suggest, but it’s his speed of thought and technical quality that sets him apart from the rest.

Aside from having the awareness around him to be one step ahead to play a pass others might not see, the speed with which he recycles the ball ensures Barcelona’s tempo quickens up when necessary and it gets them moving into dangerous situations.

That’s the point made by the BT Sport pundits in the video below, as they don’t have fond memories of playing against him, such was his class in possession which was once again on display against Chelsea.

Busquets turns 30 later this year, and so we’d arguably be well advised to enjoy him while we can before a natural decline in the latter stages of his career. Looking at the stats below though, it doesn’t look as though there is any imminent danger of that happening.

“He could go out there in a pair of velvet slippers and perform.”