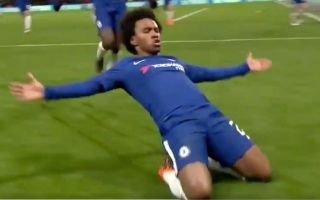 Chelsea were held to a 1-1 draw by Barcelona in their Champions League meeting on Tuesday night, with Antonio Conte seeing key performances across the pitch.

Willian’s goal had given the hosts the lead but they were ultimately pegged back by a Lionel Messi equaliser which could prove costly given the Catalan giants now have an away goal in their favour.

Further, the Blues were able to limit Barcelona’s threat for the most part, and so it will be a real disappointment for them that they couldn’t hold on to take an advantage into next month’s second leg at the Nou Camp.

Nevertheless, there were also reasons to be pleased, as N’Golo Kante and Willian were singled out for praise in particular after their performances at Stamford Bridge as seen below.

While the Brazilian ace was unfortunate not to score more goals having thumped two shots against the post in the first half, Kante was his usual energetic and tenacious self as he played a pivotal role in the heart of the midfield to restrict Barcelona and not allow them space between the lines.

In turn, it’s no surprise that the pair have received plenty of praise from Chelsea fans on Twitter, as seen below, as they were fully deserving of it and will hope to play key roles in the second leg now too in order to keep Chelsea in the competition moving forward.

It will be an entirely different test for them, but having frustrated Barca for large periods and created plenty of their own chances, this tie is still arguably finely poised.

Willian was sensational but I’m gonna go for Kante. Bossed that midfield tonight!

Messi Getting No space at all.
All down to kante!

Kante has been superb …. quietly doing his job

Kanté’s positioning in that midfield is masterful! ??

Kanté has been unbelievably good.

So far WILLIAN being on another level ??

Kante. So so important. What a player.