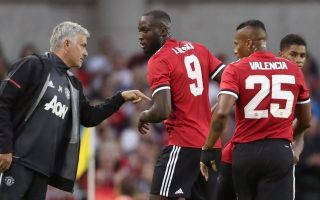 Man United fans have taken to social media to slate Jose Mourinho for his team selection tonight ahead of his side’s clash against Sevilla in the Champions League.

The Red Devils travel to Spain this evening to take on the La Liga side in the first leg of their Champions League round of 16 clash.

United have fielded a somewhat weakened line-up, with stars such as Paul Pogba and Anthony Martial out of his side’s starting XI for their match today.

The away side will be hoping to keep up their winning ways against the Spanish side today, as United won their most recent fixtures 2-0 against Huddersfield in he FA Cup fifth round.

Despite their most recent win, Mourinho’s side have been in poor form of late, with the club having lost two of their last four matches in all competitions, with those defeats coming to Spurs and Newcastle in the league.

Following the announcement of their team news, fans took to social media to slate Mourinho for his selection for the match today. Here are a few select tweets from fans criticising the former Chelsea boss for his team choices.

Another day, another poor starting line up from Man United…Mourinho must GO!

Chris Smalling has been in the worst form of his career and he still gets games. Pogba two poor games and he’s getting dragged by Mourinho. I see.

Mourinho has lost it. Benching @paulpogba is ridiculous, McTominay is not a replacement. #mufc

Poor poor line up Mourinho !! I hope we get a result but now i am thinking your man management has to he questioned !! #SEVMUN

That United team looks so poor tonight. Obvious Mourinho isn’t setting up for a draw but Id say they won’t even be in the tie after tonight #SEVMUN

All the money spent in the world and we are stuck with the pish poor Smelling and a winger for a left back ,who is pish poor also.. Mourinho u dipstick.

What a poor lineup for our biggest game of the season; Smalling and Young starting, no Pogba or Shaw either. This could go one of two ways. Alexis and Lukaku must turn up tonight. I sure hope Mourinho knows what he’s doing. https://t.co/fPHEIqHMs0

Wallahi I feel like crying man. I need to stop watching football because of Mourinho. I still think LVG and Moyes was bad but at least they didn’t drop our biggest players. I’m so mad atm ???

I don't like Jose Mourinho. You bought Sanchez and bench our future and most in form attacker. No wonder players turn on him. Bad player manager.