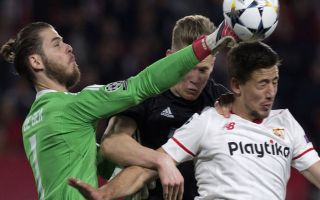 Man United secured a valuable 0-0 draw against Sevilla in the Champions League round of 16 on Wednesday, with goalkeeper David De Gea proving to be the star of the show on a tricky night for the Red Devils in Spain.

Chances were few and far between during the match, with the best one falling to Sevilla’s Luis Muriel in the 45th minute, as the Columbian saw his close range header brilliantly kept out by De Gea in the United goal.

With the match finishing all square, everything is to play for when the return leg at Old Trafford comes around in a few weeks time, as both sides look to give it their all in order to secure a place in the quarter finals.

There’s only one winner of this accolade tonight…

Spaniard David De Gea was in fine form tonight, with the former Atletico Madrid star doing everything he could to keep out Sevilla’s attack throughout the match.

8 – David de Gea has made eight saves against Sevilla, the most for a Manchester United goalkeeper in a Champions League game since Edwin van der Sar vs Barcelona in May 2011 (8). Hero. pic.twitter.com/OpxZQSzK9p

Scott McTominay and David de Gea the two best players for Manchester United. Not hard to choose from. Both saved the team on a number of occasions. Been class.

De Gea is the best goalkeeper in Manchester United history. Facts. He's playing with Chris Smalling and Young in defence while Van Der Sar and Schmeichel had world class defenders in front of them.

We simply do not deserve David De Gea. The number of world class saves he makes is just incredible. One of the best I’ve ever seen.

De Gea is a different class ???

Jose did well tonight. We look pretty ordinary at times but a Managers job is to get a result. De Gea is different class. I hope he stays.