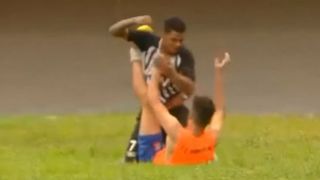 Operario’s Jefferson Reis was involved in a shocking moment at the weekend as he launched an attack on a ball boy in his side’s clash with Comercial.

In a truly incredible sequence of events, the Daily Mail report that the ball boy in question celebrated Comercial’s goal which ultimately enraged Reis and led to his shocking reaction, as seen in the video below.

It wasn’t over there either as it’s reported that the two sides were then involved in a brawl sparked by Reis and his attack, with officials having their hands full in getting everything back in order to diffuse the heated melee.

Naturally, this doesn’t reflect well on Brazilian football at all, and frankly it’s unbelievable that a player would attack a ball boy in such a way regardless of his actions.

Comercial went on to win the game 1-0 but that was undoubtedly marred by the ugly scenes seen below which undoubtedly ruined the game and painted Brazilian football in a very negative picture.

It comes on the same weekend that nine players were sent off in the match between Vitoria and Bahia, as reported by The Sun, when the game descended into chaos as a huge brawl broke out in that one too.