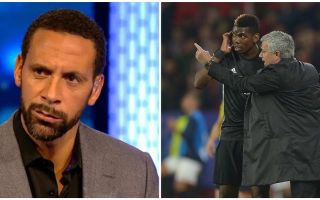 Former Man Utd defender Rio Ferdinand has waded in on the Paul Pogba debate, and has put forward his opinion on why he’s struggling.

The Frenchman has been talked about a lot in recent weeks, as a dip in form has even led to arguably over-the-top suggestions that there is a rift between him and Jose Mourinho as well as possible exit talk.

While it doesn’t seem to be at that stage just yet, Ferdinand was speaking after the goalless draw with Sevilla in the Champions League on Wednesday night, and believes that Pogba’s biggest problem is that he hasn’t got strong voices around him to help guide him.

‘I think positionally has been a big part of it. I would have been screaming at him if I was playing with him,” he told BT Sport, as reported by the Metro.

“He would have found me a nightmare because I would have been pushing him all over the park to where he needed to be. I think he needs that, he had that at Juventus, he doesn’t have it here.”

It could be argued that that was what Pogba needed at Juventus given he was still young and developing his game, and at this point having had a number of years in high-pressure situations at a high level, he should have adapted and become a leader himself.

Perhaps that’s still a little harsh given he’s still 24, but Ferdinand believes that he still does need the experience around him as evidently the likes of Chris Smalling, Phil Jones and others behind aren’t doing it effectively this season.