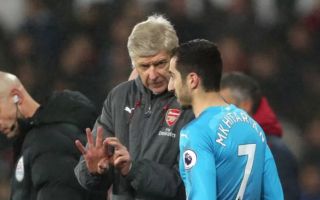 Arsenal playmaker Henrikh Mkhitaryan has responded to question marks being raised over his ability to play alongside Mesut Ozil in the starting line-up.

On paper, it would seem like a dream for most Arsenal fans as the creativity that the two possess between them will lead to quality in the final third and plenty for Pierre-Emerick Aubameyang to feed off.

SEE MORE: ‘He has no future at Arsenal’ – Pundit fears worst, urges AFC star to leave

However, there are fair reservations raised in that it doesn’t provide the Gunners with a great deal of balance in the team in terms of the pair getting back and defending to ensure that they do their part to keep things tight from a defensive standpoint.

Mkhitaryan seemingly believes there is no issue there whatsoever, as he believes Arsenal can play with two No.10s on the pitch at the same time and be successful.

Results will dictate whether or not that’s the case, especially in the big games as Arsene Wenger prepares his side for the League Cup final against Manchester City at Wembley on Sunday.

Should the pair both be selected to start, they’ll have to prove that it can be a successful strategy, and not one that leaves the Gunners open at the back to concede plenty of goals.

That is ultimately the biggest issue that they face this season, as although they boast plenty of firepower, they’ve conceded 36 goals in 27 games in the Premier League, giving them the worst defensive record of the top seven sides.