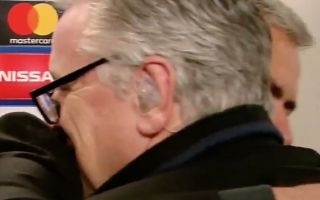 Man Utd boss Jose Mourinho showed a softer side on Wednesday night as he gave BT Sport reporter Des Kelly a hug after the draw with Sevilla.

The Red Devils were held to a goalless draw in Spain in the first leg of their last-16 Champions League tie against the La Liga outfit, but they’ll be confident of getting the result they need back at Old Trafford next month to advance.

Meanwhile, despite training earlier this week to suggest that he was fit, Paul Pogba started the game on the bench, only to be brought on after just 16 minutes when Ander Herrera was forced off with injury.

The Frenchman has been a major talking point in recent weeks having struggled for top form and been substituted by Mourinho on two occasions with his side losing away from home. That in turn has led to reports such as this one from The Sun, suggesting that perhaps there is a rift between the pair and it could lead to an exit from Man Utd.

Mourinho was evidently delighted not to have to answer more questions on Pogba, as after Kelly switched his attention to youngster Scott McTominay impressing in midfield in a big European game, the Portuguese tactician was clearly finally delighted with the focus of his questioning and proceeded to give Kelly a hug.

He added that he had been answering questions about his midfield star in his post-match press conference, and so clearly was he was relieved to talk about something else after Kelly had asked a string of questions on the controversial topic too prior to the game.

Nevertheless, unless the matter is cleared up and he rediscovers his best form to be an influential figure for United again, Mourinho could be facing more difficult Pogba-related question in the weeks ahead.

“No more Pogba questions!” ?@DesKellyBTS and José Mourinho hug it out after the match ? pic.twitter.com/OFIIhkYLyZ