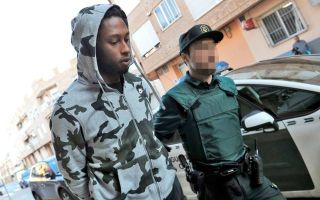 Villarreal defender Ruben Semedo has reportedly been charged with an attempted murder taking place as he and two men allegedly tried to a rob a man’s apartment.

Sky Sports report that Semedo appeared in court on Thursday, with authorities claiming he and two other men tried to rob a man’s apartment, keeping him tied up and held captive while they did so.

Villarreal have said they are investigating the player themselves, with Semedo joining the club from Sporting Lisbon last summer.

The 23-year-old is a Portugal Under-21 international and had made four appearances in La Liga for Villarreal this term.

It remains to be seen what future Semedo will still have in the game if these accusations prove correct, with Sky Sports claiming his representatives insist the player himself denies any wrongdoing.

Quite why modern day footballers who are paid such vast amounts would feel the need to get involved in burglary is hard to fathom, though it remains to be seen what further details will emerge from this case.

Semedo clearly feels these allegations are false, though it’s not looking good for him after being charged with attempted murder, assault, robbery and illegal possession of firearms.