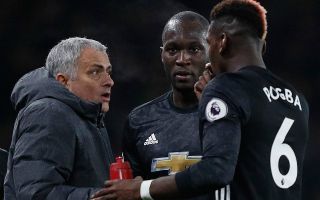 United host Chelsea at Old Trafford on Sunday hoping to get all three points in a big game at the top of the Premier League table.

Having come under more criticism after their drab goalless draw with Sevilla in the Champions League in midweek, there were various talking points other than Paul Pogba for the United boss to deal with, including injury news.

The Frenchman’s name was brought up of course, as was Romelu Lukaku, Antonio Conte given that the pair will come face-to-face after their public feud in recent months, and Ander Herrera, so here’s the best bits of Mourinho’s chat with the media.

Mourinho on Pogba:  “I think he had a very positive game for us and some players take five minutes to be ready to play, they don’t have shinpads, strapping, the shirt, he took 10 seconds to be ready to come to the pitch, to show the professionalism and show he was ready to help the team. He responded very well in a professional way both times, he was on the bench against Huddersfield in the Premier League and he responded in a professional way and he was on the bench in Seville and did the same.”

Mourinho on Lukaku’s record against the top six Premier League sides: “I don’t know but I’m not worried, 21 goals is not bad at all and I don’t measure the players’ performances the same way you do, I have other points of analysis and I’m happy with Romelu performance when he doesn’t score goals.”

Meanwhile, the Portuguese tactician also provided an injury update, and revealed that Ander Herrera will be out for a ‘few weeks’ after picking up an injury in that draw with Sevilla, and he now joins Phil Jones, Marcos Rojo, Marouane Fellaini, Daley Blind and Zlatan Ibrahimovic in being ruled out to face Chelsea.

The Red Devils are just three points above the Blues who are in fourth place, and so they can ill-afford any slip-ups this weekend with Liverpool also ready to pounce in third.