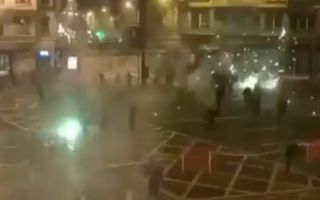 Athletic Bilbao hosted Spartak Moscow in the Europa League on Thursday night, but clashes before the game led to the tragic death of a police officer.

As seen in the videos below, supporters and police were involved in confrontations outside of the San Mames stadium, with Sky News noting that the policeman died in hospital having suffered a cardiac arrest.

SEE MORE: Video: Violence mars England-Russia with clashes in and out of stadium

It’s alleged that fans from both sides were involved, and they can be seen letting off fireworks and flares on the streets with 500 police officers said to have been deployed to avoid trouble, as per the report.

Now though, it remains to be seen what action is taken amid further ugly scenes off the pitch, with the BBC noting how a Russian fan was arrested in Munich on his way to Bilbao for his attack on an England fan at Euro 2016 in France which left him in an induced coma.

Naturally, with Spartak fans involved in this latest violence coupled with the scenes in France in 2016, concern levels will be raised ahead of the World Cup in Russia this summer as it would seem as though the authorities will have their hands full dealing with some supporters.

Further, it will also be a concern for some travelling fans, who may well be put off going to the tournament following these latest scenes involving Russian supporters.

Mad scenes in Bilbao tonight for their game against Spartak Moscow. ?? pic.twitter.com/U0aPaAMkFD