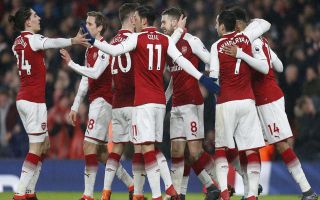 Arsenal are preparing for the League Cup final against Manchester City at Wembley on Sunday, but transfer speculation concerning them hasn’t stopped.

The Gunners will be desperate to land their best chance of silverware this season against Pep Guardiola’s side, with David Ospina set to start against City in the showpiece event.

It has been a frustrating campaign for the 29-year-old prior to this weekend though, as he has been limited to just 12 appearances in all competitions.

With Petr Cech first choice for Arsene Wenger, Ospina has had to settle for a back-up role in the cup competitions, and he has now dropped a significant hint that he may not be willing to settle for much longer.

“I am open to everything. Today I give everything for Arsenal, I like to be successful here, but you start to contemplate every alternative depending on each situation,” he is quoted as telling Directv by The Mirror.

“I still have a contract, but as I say, I always like to have more opportunities, to have more continuity in the squad as every goalkeeper needs.”

That isn’t the only problem facing Arsenal either it seems, as The Times claim that there is a growing concern at the club that they will see midfielder Aaron Ramsey play hardball over his new contract.

The Welshman will see his current contract expire next summer, and it’s claimed he will delay signing new terms in order to try and force Arsenal to offer him lucrative terms to avoid seeing him leave for nothing.

That’s a risky approach on both sides in truth, and in an ideal world for both parties they will reach an agreement on new terms well in advance to secure his future at the Emirates.

Ramsey has struggled with injuries throughout his career, but he’s bagged six goals and eight assists in 19 appearances so far this season to showcase what he can still offer Arsenal.