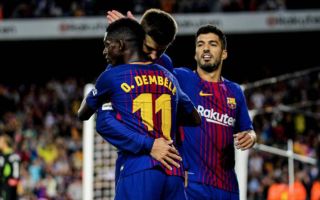 Barcelona have worries over Ousmane Dembele with the star struggling with life since signing from Borussia Dortmund.

The respected Italian outlet CalcioMercato has reported that Dembele has struggled to adjust to life in Spain since moving to Barcelona last summer.

The report states that Dembele appears to be growing unhappy in Spain with the attacking star currently living alone. Further, the star has struggled to learn the native language and has been riddled by injuries.

A big money move to a club like Barcelona is always going to be daunting, especially when you are just 20-years-old.

Barca paid an audacious fee for the winger but he has featured sporadically recently for the side and was even left out of Barcelona’s Champions League starting eleven against Chelsea last week at Stamford Bridge.

The fee paid for Dembele was £135.5m but the star has made just five appearances in La Liga this season, far less than Barca would have foreseen the attacker making given the enormous fee paid for him. (Fee per BBC)

The news that Dembele is unsettled at Barcelona comes just weeks after the Manchester Evening News cited a report from Spanish paper Don Balon which stated that United and Jose Mourinho could be offered Dembele in the summer in an astonishing turn of events.