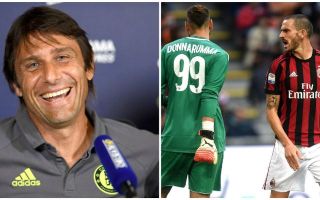 Chelsea could reportedly have an issue this summer, and AC Milan goalkeeper Gianluigi Donnarumma has emerged as a potential solution.

As noted by The Sun, doubts remain over Thibaut Courtois’s future at Chelsea, as he has yet to sign a new contract with his current deal set to expire in just under 18 months time.

In turn, if he does opt to leave Stamford Bridge, Antonio Conte will have a major void to fill in his squad as the Belgian international has been a pivotal figure for them since returning from his loan spell with Atletico Madrid in 2014.

Courtois has won two Premier League titles in the last three years with the Blues, and his shot-stopping as well as his organising of the backline has been a major part in that success.

Should he move on, the Sun claim that Donnarumma tops Chelsea’s shortlist of replacements, but AS now note that Paris Saint-Germain have also switched their focus to the Italian goalkeeper.

It’s no real surprise that Donnarumma is attracting such attention, given he’s made 108 appearances for the Italian giants at just 18 years of age, showing great consistency and maturity throughout his time in the starting line-up.

Milan will undoubtedly want to keep hold of him for years to come having seen him improve and develop into a fine young player, but it remains to be seen whether or not that plays out with Euro giants such as Chelsea and PSG reportedly set to knock on the door.

Donnarumma was publicly slammed by supporters last summer after initially rejecting the club’s contract offer, but after penning new terms and now seemingly putting that behind him, he is back to being a important part of Gennaro Gattuso’s plans.