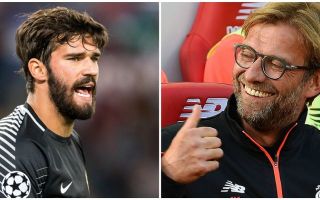 Liverpool took a major step towards fixing their defence in January with the signing of Virgil van Dijk, now they could solve their issue between the posts too.

It has been a weakness for the Merseyside giants, as while they’ve scored an impressive 61 goals in 27 Premier League games so far this season, they’ve also conceded 31 in that time to give them the second-worst defensive record out of the top seven sides.

Jurgen Klopp has switched between Loris Karius and Simon Mignolet over the last two seasons, with the former now establishing himself in the starting line-up.

However, both have been guilty of costly mistakes along the way, and so a new goalkeeper could bring additional consistency and solidity at the back.

Roma goalkeeper Alisson appears to be a potential solution, with UOL Esporte in Brazil now reporting that Liverpool have an advantage over both Paris Saint-Germain and Real Madrid in the race to sign the Brazilian international.

It’s claimed that he sees the Reds as his first choice with talks at a more ‘advanced’ stage, and so that certainly paints a very positive picture from a Liverpool perspective.

However, there is a negative part of this transfer story as it could prove to be very expensive to prise the 25-year-old away from the Italian capital.

According to Calciomercato, Roma want Alisson to sign a new contract after an impressive campaign this year, and that new deal could have a €90m release clause inserted into it.

In turn, it remains to be seen whether or not the Premier League giants would be willing to splash out such a big fee, but given he’s kept 14 clean sheets in 32 games so far this season and has pulled off countless world-class saves throughout the campaign, he would be an important addition for any side.

Time will tell if Klopp continues to show faith in Karius or looks outside of the club, but with the report from Brazil in mind, they could be in a great position to take Alisson to Anfield this summer if they pursue him.