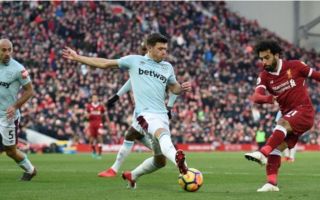 The home side opened the scoring in the first half through Emre Can, with Mohamed Salah scoring his 31st of the season with a lovely left-footed finish just after half time.

Firmino then added a third with a glorious no-look finish, with Michail Antonio pulling one back for West Ham just minutes later.

Sadio Mane then added a fourth later on the Reds leapt up to second position in the Premier League.

German international Emre Can was absolutely sensational today, with the former Bayer Leverkusen ace bagging himself a goal and an assist in the Reds’ rout.

Despite rumours of him leaving at the end of the season, it’s nice to see the midfielder still willing to put in a solid effort for the Merseyside club.

This tweet sums up the player’s impressive performance today

EMRE CAN will go on to be a superstar

He was first class today

He bossed the midfield today #LFC

Mohamed Salah broke a Premier League record today, and boy does he deserve it…

20 – Mo Salah has scored 20 goals with his left foot in the Premier League this season, the most by a player in a single season in the competition's history. Phenomenon. pic.twitter.com/M6ybeBTWFF

People sleeping on the Firmino goal. He's popped it through Adrian's legs and done a no look shot. He's world class.

Firmino, most underrated player in the league, also world class ? come on the reds ?

Not will be – he is right now.