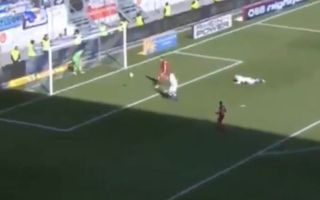 Fortunately for the Dutch shot-stopper his side went on to win the game 2-1, but there is absolutely no excuse for this as we haven’t got a clue what was going through his head.

In the 17th minute of the encounter, defender Gerrit Nauber went to head the ball back to his ‘keeper after a long ball forward which started with a goal kick at the other end, only for Kutschke to capitalise and find himself with an opening.

Incredibly, Flekken had turned his back to the play and grabbed his water bottle from the goal and was completely oblivious to what was happening as he turned around just in time to be horrified by the sight of Kutschke tapping into the back of the net.

It’s still unclear as to what happened and why he switched off for so long, but this will be a hugely embarrassing moment for him moving forward. Luckily, it didn’t cost his side points but we’re guessing his coach still won’t be particularly impressed with this outrageous lapse in concentration.

What… What just happened?!

The keeper suffers a real life glitch, turning around and walking into the net…

With the striker through on goal ???