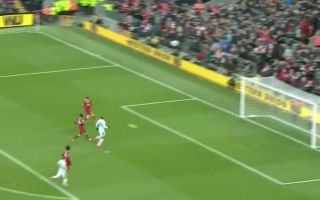 Liverpool ace Roberto Firmino added insult to injury for the Reds today, with the Brazilian ace scoring his side’s third against West Ham with a cheeky ‘no-look’ finish.

The home side opened the scoring through German Emre Can, before Mohamed Salah bagged his 31st goal of the season in all competitions with a fine left footed effort that sent Adrian the wrong way.

Firmino then took his time to shine, as the Brazilian forward saw his shot saved by Adrian in the Hammers goal, with the 26-year-old then having an empty net to tap the ball into, and boy did he, as the former Hoffenheim star did his trademark ‘no-look’ finish to put the home side three goals to the good.

It was the player’s 22nd goal of the season in all competitions, with the forward doing his best to quash the calls that Jurgen Klopp’s side need an out-and-out striker in order to truly challenge for the league title.

Here’s a clip of Firmino’s ridiculously cheeky finish against David Moyes’ side this afternoon.

(Video) “He did not know what to do” – Juan Cuadrado blast referee for allowing controversial Roberto Firmino goal in Colombia’s 2-1 loss to Brazil Jun 24 2021, 5:44
Copa America