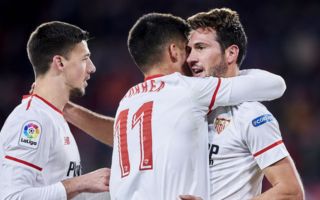 Barcelona are reportedly looking to offer €22M plus Spanish defender Aleix Vidal in order to secure the signing of Sevilla star Clement Lenglet, who has also attracted interest from Real Madrid.

This is according to Spanish site Don Balon, who are reporting that Los Blancos are willing to meet the player’s €30M release clause, and that Barcelona are also keen on the defender.

The news outlet are also reporting that the Blaugrana are keen on including Vidal as part of the deal for the player, and that an offer of €22M plus the former Sevilla star would benefit Vincenzo Montella’s side.

Despite being just 22, Lenglet has already managed to cement his place in Montella’s first team plans at Sevilla.

So far this campaign, the Frenchman has managed to clock up a total of 37 appearances in all competitions, a record that shows Montella is confident in the player’s abilities.

Since his move from Sevilla to the Catalan giants in the summer of 2015, Vidal has failed to make an impact at the Nou Camp, with the player only being able to clock up a total of 46 appearances.

This campaign, Vidal has been involved more than compared to previous seasons, with the Spaniard making a total of 20 appearances for Valverde’s side this season, with the majority of these coming in La Liga.

Should Barcelona end up making a move for Lenglet, it’ll be interesting to see if Vidal is used a makeweight in order for them to secure the signing of the Frenchman.

Ex-star names Barcelona player that ‘everyone is killing’ after horrid treatment from fans Feb 23 2021, 15:37
FC Barcelona