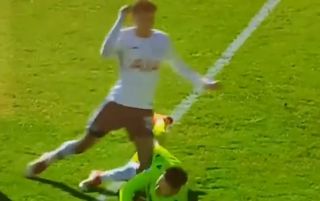 Tottenham star Dele Alli was seen taking what looked like a blatant dive in Spurs’ Premier League win over Crystal Palace this afternoon.

It turned out to be a good day at the office for Mauricio Pochettino’s side, and for Harry Kane in particular as he scored his 23rd goal in London derby matches with the late winner at Selhurst Park.

Alli, however, disgraced himself with this poor effort at playacting, with the youngster going down before contact was even made with onrushing goalkeeper Wayne Hennessey.

Fans are now all over the 21-year-old on Twitter, slamming the England international for his diving, with many suggesting he gets away without earning more of a bad reputation simply because he’s English.

Regardless of nationality, it’s clear Alli looks to have tried to con the referee here and that’s certainly not acceptable, so we all hope to see this talented player cut this side of his game out before too long.

Another week. Another dive by Dele Alli. Scum.

TAKE A FUCKING LOOK AT THIS NOW @FA

Surely a ban has to happen with all these dive attempts from Alli. pic.twitter.com/PYlWdnBRm1

Palace fans have started a chant which’ll he sang by every club in the land soon.

Another dive from Dele Alli here at Palace…

Knife-wielding assailants who punched Tottenham star yet to be brought to justice after a year Apr 3 2021, 9:40
Tottenham FC

“Incredible” Tottenham talent urged to follow Man United misfit’s example to get back into the England squad Mar 25 2021, 10:00
Tottenham FC