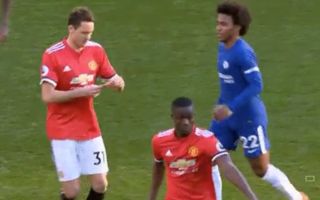 Chelsea ace Willian produced one of the moments of the match against Man United today, after the Brazilian tried to take a sneak peak at a note give to Red Devils ace Nemanja Matic.

The match itself finished 2-1 to the home side, with winger Willian opening the score for the Blues, before two strikes from Jesse Lingard and Romelu Lukaku saw Jose Mourinho’s saw turn the scoreline around and secure a vital win over their rivals.

The result now means that the Red Devils now sit in second place, having leapfrogged rivals Liverpool with a win at Old Trafford this afternoon.

During the match, Willian produced a moment that certainly made a few fans chuckle, as the Blues forward tried to take a peak at a note given to midfielder Nemanja Matic, presumably by manager Jose Mourinho.

Fans on social media were in fits at the Brazilian’s level of cheekiness, as he saw the funny side of their defeat to Mourinho’s men.

Here’s a clip of the incident and a few select tweets from fans talking about the incident.

Willian chasing Matic to know the content of the note ??

Anyone else spot Willian trying to read the note Bailly gave to Matic ???

See willian trying to read the note with Matic ?? #MUNCHE

See willian trying to read the note with Matic ?? #MUNCHE

LOL at Willian trying to read the instructions for Matic ???