BBC pundit Garth Crooks has selected his team of the week, and while Liverpool dominate, it’s also got a strong Man City contingent as he does a competition crossover.

Jurgen Klopp’s men swept aside West Ham United in a 4-1 win at Anfield on Saturday, while City secured the Carabao Cup as they saw off Arsenal at Wembley in another impressive display.

In turn, with Crooks going across two competitions to put together his best line-up this week, it makes sense that those two clubs feature heavily.

It’s unclear as to what Claudio Bravo did to secure a place in the XI given he didn’t have a great to do against a poor Arsenal side, although captain Vincent Kompany is a great selection as not only did he keep things tight at the back and nullify Pierre-Emerick Aubameyang’s threat, he also got on the scoresheet.

Sergio Aguero scored the all-important first goal, and so as far as his outfield picks go, Crooks can’t be faulted on this one.

As for Liverpool, Virgil van Dijk slots into the heart of the defence after a commanding display, while Mohamed Salah, Alex Oxlade-Chamberlain and Andy Robertson fill the midfield, albeit the latter is in a strange left-wing role as opposed to being a left-back, his natural position.

Nevertheless the trio all make a strong case for inclusion, with Salah taking his tally for the season to 31 goals in 37 games for the Reds.

Elsewhere, Eric Dier completes the backline after an impressive outing for Tottenham in their late win over Crystal Palace, and Willian kept his fine recent form going with another goal against Manchester United and an all-round top performance.

Up front, Glenn Murray of Brighton is joined by Romelu Lukaku, with the latter ending a barren run against the top eight sides in the Premier League.

Not only did he find the back of the net, but he also turned provider for the winning goal courtesy of Jesse Lingard, and so the Belgian international certainly earns his spot having been so decisive.

All in all, aside from being a little strange to include the League Cup in his picks in a traditionally Premier League team of the week, Crooks has done a decent job. Some will be frustrated with obvious snubs, but all those mentioned above, barring perhaps Bravo, deserve recognition for a good weekend on the job. 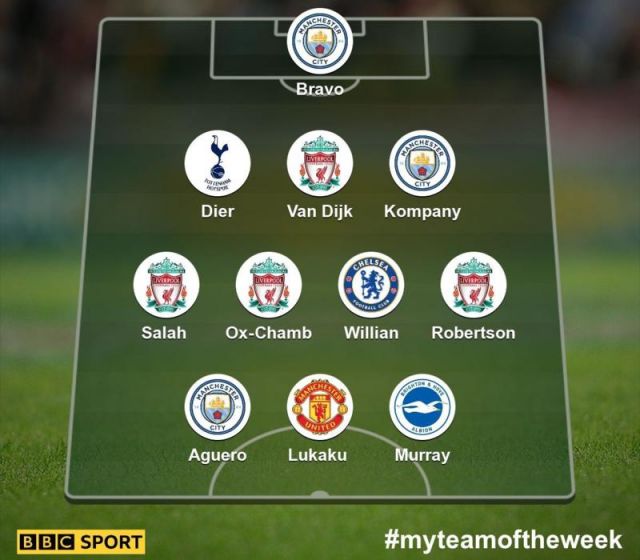