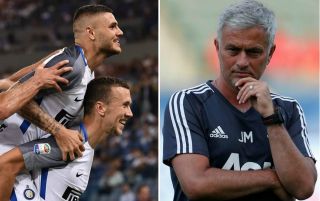 Manchester United are reportedly prepared to pay the £97million release clause to seal the transfer of Inter Milan striker Mauro Icardi ahead of the likes of Real Madrid and Paris Saint-Germain.

The Argentina international has had a superb season in front of goal, scoring 18 in just 22 Serie A matches to establish himself as among the most clinical forwards in Europe right now.

That hasn’t escaped the attention of Manchester United, with Corriere dello Sport linking them as among his suitors while additional information from the Sun states they’re prepared to meet his £97m buy-out fee to bring him to Old Trafford.

United don’t exactly look in desperate need of a new striker, but could perhaps do with an upgrade on Romelu Lukaku, who has largely failed to live up to expectations since his summer move from Everton.

The Belgian was in fine form against Chelsea this weekend to help himself to a goal and an assist in an important 2-1 victory, but doubts will remain about his long-term suitability.

Icardi may be more to Jose Mourinho’s liking, and it would be a big boost to get him ahead of major European rivals such as Real and PSG if possible.