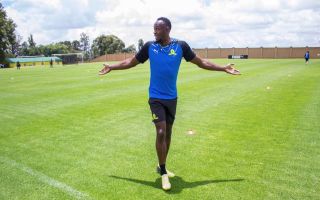 Usain Bolt got us all talking on Monday as he revealed he had signed for a football club, now Mamelodi Sundowns FC have dropped a massive hint.

The sprint superstar who has delighted us with his achievements on the track at multiple Olympics and World Championships, is seemingly set to try his hand at football.

SEE MORE: Video: Usain Bolt confirms he’s signed for a football team after talks with Manchester United and a trial with Borussia Dortmund

As seen in the video below posted on his Twitter account, he revealed that he would be signing for a club, and that he would make a big announcement at 8am on Tuesday.

I’ve signed for a football team! Find out which one this Tuesday at 8am GMT ? pic.twitter.com/iFTlWxfy7x

It just so happens that Mamelodi Sundowns FC also have a big announcement to make at 8am on Tuesday, and they’ve included an image of Bolt which pretty much tells its own story.

Football will never be the same. Find out tomorrow 8am GMT! ?? #Sundowns pic.twitter.com/nifRZFR62s

It’s going to take a seriously shock twist for this not to be the signing that Bolt has hinted at, as the 31-year-old looks set to try his luck away from the major spotlight for now with a dream move to Manchester United arguably still top of his list given he supports the Red Devils.

Based on the hints above, the South African Premier Division is about to get a new superstar playing in it…

Usain Bolt confirms support for Argentina but his choice for the GOAT is a surprise Apr 9 2021, 9:17
Manchester United FC

Usain Bolt is in talks to continue his football journey in Mexico and join up with Diego Maradona Nov 21 2018, 16:59