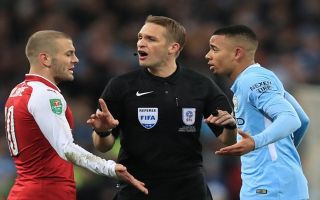 Arsenal midfielder Jack Wilshere has bemoaned the decisions that went against his side in their Carabao Cup final defeat to Man City on Sunday.

The Gunners suffered a 3-0 defeat in the showpiece event at Wembley over the weekend, raising real doubts now over their ability to avoid ending the season empty-handed.

Further, they face an uphill task qualifying for the Champions League next season as they sit 10 points adrift of fourth-placed Tottenham in the Premier League table while they take on an in-form AC Milan in the Europa League next month.

In turn, the disappointment of losing to City will be huge, and while he has attempted to try and rally supporters to get behind the team for the run-in, Wilshere seemingly couldn’t hold back his criticism of referee Craig Pawson.

The 26-year-old evidently believes key decisions went against Arsenal, as explained in his rant on Instagram as seen below.

He does eventually note that he doesn’t want to come across as making excuses, but from the foul in the build-up to the first goal, the offside call for the second and a possible red card for Fernandinho, Wilshere wasn’t happy with what he saw from Pawson.

Unfortunately, we can’t agree with him on the ‘foul’ on Shkodran Mustafi, as the German international has to be stronger in his battle with Sergio Aguero before the Argentine opened the scoring.

An argument could be made for the other two issues raised by Wilshere, but ultimately Arsenal simply weren’t good enough on the day and the better team won. Now they have to react when Pep Guardiola’s side visit the Emirates on Thursday night for a league meeting.

Hard to put into words my emotions about yesterday. City are a good team and deserved to win yesterday. Alot of people have had thier say on us and we have to accept cristism when we lose. That being said i can’t accept some of the decisions that went against us yesterday. What ever you say about the first goal, its a foul. The second goal is offside. There should have been a second yellow in the first half. Yes this happens in football but its still hard to accept. And people will say we are looking for excuses but these are facts. Anyway we need to respond, starting on thursday. Thanks to all the gooners for your support and trust me we feel the same but we need to stick together ?