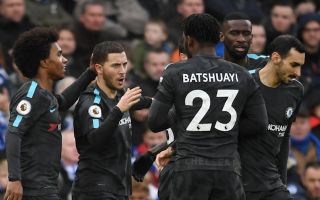 The Belgium international, who could barely get a game under Antonio Conte at Stamford Bridge, has shone in his short time in the Bundesliga since completing a January loan move from the Blues.

Batshuayi has scored five goals for Dortmund already, and Zorc claims this fast start to life in Germany has got other clubs interested in him ahead of the summer.

‘The situation hasn’t changed since his signing, and certainly not to our advantage,’ Zorc told Kicker, as translated by the Evening Standard.

‘He has become even more interesting to others.’

At this point, most Chelsea fans will surely be wondering why on earth Batshuayi hasn’t simply been given more playing time at the Bridge.

The 24-year-old arguably looks an upgrade on the likes of Alvaro Morata – who has struggled since joining from Real Madrid in the summer – and Olivier Giroud, who only looks to have been brought in as a backup option from the bench anyway.

Batshuayi still has his best years ahead of him, and though raw, looks to have the potential to improve immensely if given that playing time and shown some trust, as he has been at Dortmund.

Ultimately, Chelsea have been here before too many times, with players like Romelu Lukaku, Kevin De Bruyne and Mohamed Salah not given a chance at Chelsea early on in their careers and now going on to become star performers for their rivals.

It remains to be seen who is in for Batshuayi at the moment, but there must be the real risk of history repeating itself if they let him go.