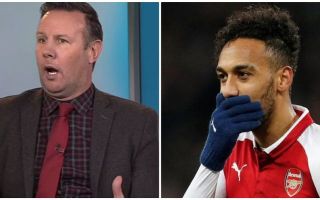 ESPN pundit Craig Burley has revealed his belief that Arsenal striker Pierre-Emerick Aubameyang must already be regretting his decision to join the club.

As per BBC Sport, the 28-year-old signed for the club from Borussia Dortmund in a deal worth £56m last month, joining former teammate Henrikh Mkhitaryan at the Emirates.

Arsenal did lose Alexis Sanchez, but the quality between the two new additions would surely have given many hope that they could enjoy more positive moments in the second half of the campaign.

It doesn’t appear to be working out that way as of yet as while they sit 10 points adrift of the top four in the Premier League, they lost to Manchester City in the Carabao Cup final at Wembley on Sunday and so arguably blew their best chance of silverware this season.

Burley was seemingly keeping a close eye on Aubameyang’s body language during that loss, and he has argued that the Gabon international is already regretting his move.

That seems a little over the top from the former midfielder turned pundit at this point, but Arsenal’s weaknesses and issues will undoubtedly be raising concern for the club’s top players and supporters over their ability to win major honours moving forward.

As a result, instead of holding a feeling of regret, Aubameyang and others will perhaps be anxious to see what is done in the summer to strengthen the current squad with a porous defence undoubtedly having to be at the top of the agenda of things to fix.