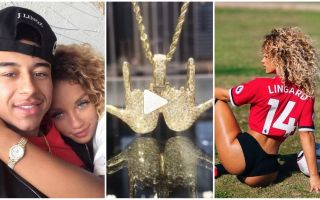 Life is good on and off the pitch for Man Utd ace Jesse Lingard it seems. After scoring the winner against Chelsea on Sunday, his girlfriend Jena Frumes has treated him.

The pair have become a lot more public in recent times, with American model Frumes in particular taking to Instagram to show her support for her partner as well as posting images together.

It seems that Lingard is very much in her good books right now, as she was keen to show off the his and hers flashy necklaces that she bought for them with his goal celebration used as inspiration.

We dread to think how much they cost, but it’s quite the touch if you’re the Man Utd ace as he’s currently enjoying himself this season with the 25-year-old bagging 13 goals and five assists in 35 appearances in all competitions.

With life treating him well away from football too it seems, it looks like he’s settling well now and will look to push on in his career with Frumes seemingly set to be by his side and supporting him through the times ahead.

Whether he’ll get the nod from England boss Gareth Southgate for the World Cup squad this summer remains to be seen, but aside from the new chain, he’ll hope he can bring out the celebration for club and country many more times in the coming months.