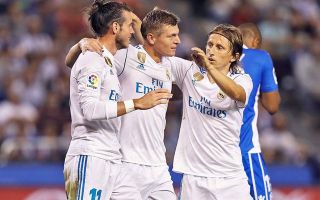 Real Madrid star Gareth Bale has reportedly given the green light to complete a transfer to Chelsea as part of a swap deal involving Belgian forward Eden Hazard.

The Wales international is increasingly warming to the idea of moving to Stamford Bridge as he sets his sights on a return to the Premier League this summer, according to Don Balon.

Bale could be an ideal signing for Chelsea if they do lose Hazard to Real Madrid, with the former Tottenham man showing himself to be one of the finest attacking players in the world, particularly during his previous stint in England with Spurs.

Don Balon claim the 28-year-old has given the go-ahead for his club to offload him to Chelsea in their bid to bring in Hazard, which could spell bad news for rumoured rival suitors Manchester United and Liverpool.

Don Balon recently claimed Liverpool had made an offer for Bale, while another of Don Balon‘s reports suggested an agreement was close for him to move to Manchester United.

Marca recently reported that Bale could leave Real Madrid for around €90million, but a swap deal could be the best way for Los Blancos to get rid of an unwanted player who might no longer command such a hefty transfer fee.