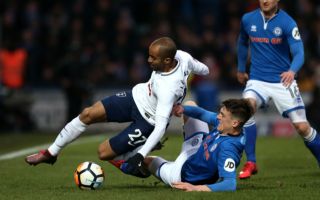 Spurs fans were overjoyed with Lucas Moura’s performance this evening, as the Brazilian put in a world class display as his side crushed Rochdale 6-1 in the FA Cup.

Spurs took the lead through Heung Min-Son before being pegged back by the away side just before half time.

Fernando Llorente then decided to steal the show in the opening minutes of the second half, as the Spaniard took just 12 minutes to grab a perfect hat-trick to put Mauricio Pochettino’s side in the driving seat.

Son then added his second of the match a little later on, with Kyle Walker-Peters then getting in on the act in the dying minutes of the match to put the cherry on top for the north London side, who booked their place in the quarter finals.

Following the match, fans took to Twitter to heap praise on Lucas Moura, who joined the club for £23M from PSG in the January transfer window as per BBC.

Here are a few select tweets from fans praising the Brazilian for his outstanding performance this evening.

Spurs have found a new superstar in Lucas moura. He is a class act #TOTROC

Genuinely excited about Lucas Moura in a @SpursOfficial shirt. He’s been class in every game I’ve seen so far. #coys #assist #slalomruns

I know it’s only Rochdale but Lucas Moura has been absolutely class.

KWP on for Lucas. The Brazilian was class again today. Looking an amazing signing

Lucas is the MOTM today, many" great pass and through pass.. CLASS ! #COYS

As much as Llorente will be MoM based on goals scored, but Lucas was absolute class today. Made things happen and at pace too, great signing so far