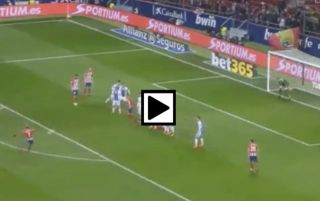 Antoine Griezmann bagged all four in a 4-0 rout for Atletico Madrid this evening amid rumours of the player agreeing a summer move to Barcelona.

Atletico were seven points behind league-leaders Barcelona going into the match, however following the Frenchman’s heroics, Los Rojiblancos now sit just four points behind the Blaugrana having played a game more.

The Sun, who are re-reported from TV3, state that the forward has agreed a move to Ernesto Valverde’s side in the summer transfer window which would set the Catalan giants back €100M.

All four of Griezmann’s goals were fantastic, with his second, a 25-yard free kick, being a thing of beauty as Diego Simeone’ side cranked up the pressure on table-toppers Barcelona ahead of their match against each other on Sunday.

The four strikes now mean that the former Real Sociedad star has moved into Atletico’s top 10 goal-scorers of all time, an impressive feat considering he’s only been at the club since 2014.

Here are the clips of all of Griezmann’s goals this evening, as the Frenchman looks to be showing exactly why Barcelona are in pursuit of him.