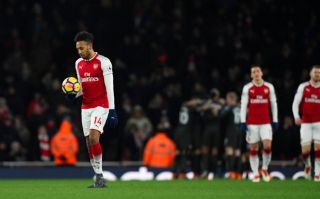 Manchester City followed up their Carabao Cup final win over Arsenal by beating them again in the Premier League at the Emirates Stadium this evening.

Pierre-Emerick Aubameyang missed a penalty for the Gunners as goals from Bernardo Silva, David Silva and Leroy Sane killed the game before half-time.

City were full of quality all over the pitch tonight, but it’s hard to look past the sparkling display of Leroy Sane out wide.

The young German is becoming a truly world class player under Pep Guardiola, and he destroyed Arsenal in that first half, setting up one and scoring another.

Quick and skilful on the ball and with the composure to pick a pass, his play on the first goal was a work of genius as he beat three players on the left-hand side before finding Silva for his fine finish. There was just no stopping him.

That penalty miss just tips this prize in Aubameyang’s favour, with the big-name January signing from Borussia Dortmund a massive disappointment today.

So prolific during his time in the Bundesliga, Aubameyang’s only goal in the Premier League remains that offside effort against Everton, which already feels like a long, long time ago.

The Gabon international should have done much better tonight but was largely invisible and messed up his big moment at the Emirates Stadium.

While there’s no doubt an incredible City team are playing an Arsenal side low on confidence, stats like this remind you just how impressive this was…

3 – Arsenal have conceded three goals in the first half of a Premier League home game for the first time ever. Overwhelmed. pic.twitter.com/BGR7ok0X7f

Predictably, the jokes flooded in about Arsenal and added time, following Arsene Wenger’s complaint after the Carabao Cup final…

How much added time do you want today, Arsene? pic.twitter.com/p3ffW9R9Po

I hope the fourth official plays all the additional time today. Would hate to miss the chance to save the game.

Arsene, please ask for more added time. We have a chance for a comeback here

Wonder if Wenger will be moaning about time added on tonight

Wenger will still complain about the added time. ?